A Tale of Two Cities by Charles Dickens – my book review 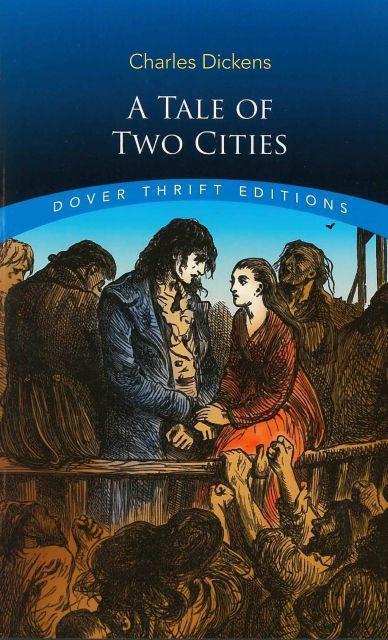 Ironically, A Tale of Two Cities is really a tale of one city—Paris at the time of the French Revolution. Dickens’s immortal opening lines perfectly capture the spirit of the time. It was the best of times because the worst of times was about to end for the poor exploited people of France, but the manner in which change comes about makes it one of the most terrifying times in history.

Charles Dickens is known for his habit of exposing the suffering of the poor and the injustices done to them, usually by the rich and callous upper crust of society. His writing is definitely important, but I don’t always enjoy it. Not so with A Tale of Two Cities. On top of seeing the good and the evil, we also see the transformation of one person, which is the crux of the novel.

Sidney Carton is not a bad man, but a man without a desire to live or to be a good man. He is bored by his well-paying solicitor job, and spends his nights drinking until stupor comes and releases the hold of consciousness.

“Sadly, sadly, the sun rose; it rose upon no sadder sight than the man of good abilities and good emotions, incapable of their directed exercise, incapable of his own help and his own happiness, sensible of the blight on him, and resigning him-self to let it eat him away.”  – narration about Sydney Carton

The only thing Carton ever shows interest in is Lucie Manette. But Lucie won’t return his love. Her heart has been captured by the valiant Charles Darnay. In a scene that seems a bit contrived (because it seems to arise out of nowhere), Carton vows to Lucie that she can always count on his help if she ever needed it. Another strange fact is that Carton and Darnay look a lot alike, a fact that we accept when Darnay is exonerated in his first trial in the book.

If you’re not familiar with the story, now would be the time to stop reading (spoiler alert!).

Of course, when Carton switches places with Darnay in the Bastille, everything becomes clear. By saving the husband of the woman he loves, he gives his hollow life meaning. He imagines that his brave act will be talked about for generations by the Manette-Darnay family.

A Tale of Two Cities is about a man’s decision to change himself, to become moral, to do something significant. After showing us the good in doctor and Lucie Mannette, and in Charles Darnay, then showing us the bad in Marquis St. Evrémonde, an evil that led to the awakening of the monstrosity in souls of the wronged poor, Dickens shows us a man who isn’t either, who’s never picked a side, who’s not good nor bad, a lonely man with an empty life—until he chooses to save Charles for Lucie.

We all have to choose sides in life. Every action is either pro-life or anti-life. It is Sidney’s awakening and ultimate choice that makes A Tale of Two Cities the eternal and compelling story that it is.